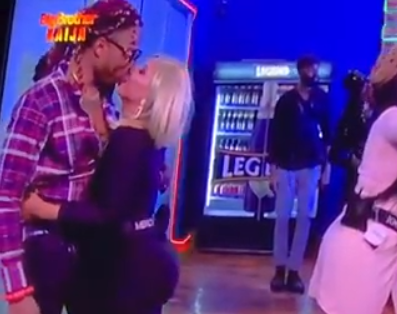 BBNaija couple, Mercy and Ike have once again thrilled Nigerians with another of their numerous romantic shows.
Despite the troubles they encountered during the previous party that resulted in Mercy getting a strike, the couple has forged on and shown us that their love for each other is here to stay.
During the Saturday BBNaija party, Mercy and Ike served up couple goals as they were seen dancing slowly and after a while, they shared a slow sweet kiss. Check out the video below.
Just as Ike confessed when he opened up to Biggie about his relationship with Mercy, it has been quite challenging as the newly sprouted romance has had no space to grow since they are all confined in the house. As a matter of fact, the numerous fights and challenges at a point scared fans who are rooting for them as it seemed like the love they have for each other might be smothered by the competitive spirit in each of them.
Nevertheless, fingers are crossed as regards their relationship. Do you think Mercy and Ike’s romance is just another strategy?
Tell us what you think in the comment section.
READ ALSO:   BBNaija: Tacha Blows Hot, Calls Khafi Out For Doing This [Video]
Related Topics:BBNaijaIkeMercy
Up Next

BBNaija: Pictures of Khafi, Tacha, Mercy and others during the Scanfrost sales pitch task