Skip to the content
Several persona have been left groaning in pain after two buses collided on the Oshodi-Apapa expressway. 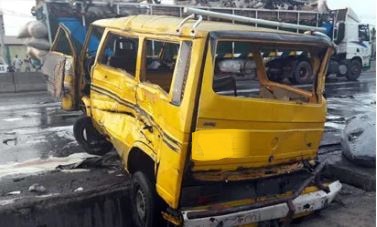 According to Vanguard, many got injured on Tuesday afternoon as two commercial buses collided along Oshodi-Apapa Expressway.

It was reported that a Danfo bus rammed into another bus which was coming in the opposite direction.

Eye witness account disclosed that the accident occurred on Tuesday afternoon and that many were feared injured in the ghastly accident.

Further sources disclosed that the accident was caused by speeding and reckless driving on the part of one of the drivers, who was coming in the opposite direction.

An eyewitness said that shortly after the disturbing incident between the two commercial buses, the defaulting driver took to his heels as against being Lynch by mobs in the area.