Skip to the content
The Independent National Electoral Commission, INEC, on Monday declared the All Progressives Congress, APC, governorship candidate, Yahaya Bello as the winner of the governorship election in Kogi State on Saturday. 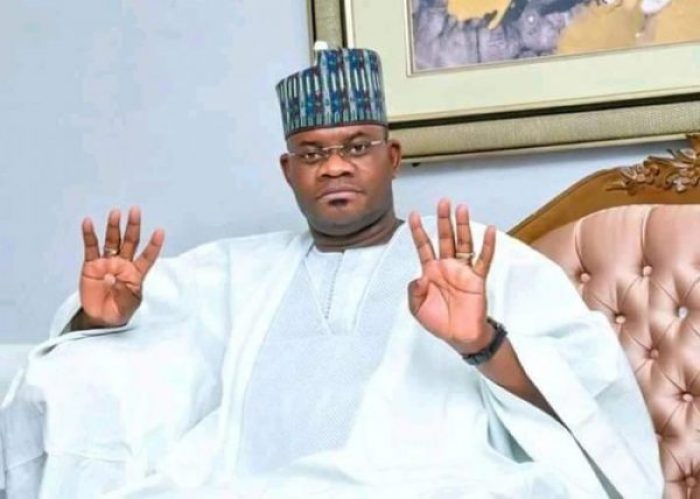 Bello polled a massive 406,222 votes to defeat his contestant, Musa Wada of the Peoples Democratic Party, PDP, who scored 189,704 votes to emerge second.
With the result, Bello has been re-elected for a second term in office.
INEC’s Returning Officer for the election and Vice-Chancellor of Ahmadu Bello University (ABU), Zaria, Professor Ibrahim Garuba, said Bello had been declared winner, having scored the highest number of votes during the poll conducted on Saturday.
Umar said the total number of cancelled votes were 149,576 and that the margin of lead was 216,518.
Also, Mrs. Natasha Akpoti of the Social Democratic Party SDP came third in the exercise with 9,482 votes.
INEC had on Sunday evening suspended further collation of results till today. 19 Local Governments had been collated yesterday while results for Ibaji and Lokoja were being awaited.
When collation resumed on Monday morning at about 9.30am, the Returning Officer for Dekina made clarifications on why votes were cancelled in certain poling units in the Local Government.
After the clarifications, Garbadeen Olugbenga, the Returning Officer for Ibaji gave the result of the LG. According to him, the APC won in the Local Government, having polled 12,682 votes while the PDP polled 10,594 votes.
He said the total registered voters were 66,675 but that only 25,598 of them were accredited, as the total votes cast in the area were 25,258.
In Lokoja, the Returning Officer said there were 137,301 registered voters, but that only 34,897 voters were accredited. In Ibaji, APC scored 19,451 votes while PDP garnered 11,059 votes.
During the collation, INEC announced cancellation of votes in many Polling Units and many Local Governments across the state. Ballot box snatching, violence, over-voting and fighting were among reasons preferred for the cancellation. 25 political parties participated in the election.
Meanwhile the PDP and Wada at a media briefing on Sunday rejected the result, describing it as a ruse that would be challenged at the tribunal. The party alleged widespread violations of the Electoral Act. Also, the party, through its agent, Capt. Joe Agada refused to sign the final copy of the result as a protest against its outcome.