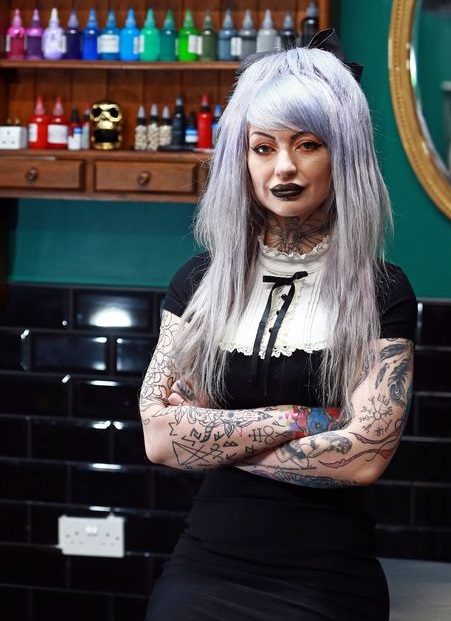 A woman who claims to be the most inked up mum in the UK has 100 tattoos which almost cover her entire body – and she wants more.Since she got her first tattoo at the age of 17, Shelby Toms has thrown herself into the world of body art.Despite the 36-year-old being nearly completely covered from head to toe in tattoos, she plans to get even more.Her mission is to have her whole body, aside from her face, 100 per cent decorated in art work.Shelby, who recently won Miss Alternative Model 2019, said: “I’ve got over 100 tattoos, all over my body – my neck, arms, ribs, legs, all over, but not on my face.“My face is probably one of the few places I don’t want a tattoo.“I got my first tattoo at the age of 17, then I just continued round there.”For Shelby, who works as a tattoo artist in Newcastle, covering her body in permanent ink has helped her through a difficult time in her life.“I sadly lost my mum and brother to suicide in 2009 and 2015, so from then on decided that I was going to live life to full and do what I really wanted, which in my case was get lots of tattoos,” she said.“When I started getting more tattoos and being who I really wanted to be, I almost felt reborn and rediscovered.”Shelby, who is mum to Katlin, 15, Macey, 10, and six-year-old Michael, started modelling at the same time as her eldest daughter.Mum and daughter got behind the camera for the first time when a student photographer friend of Shelby asked them to model for her.Another photographer friend, Debbie Todd then suggested Shelby put herself forward for the Miss Alternative Model 2019 competition.The mum-of-three went on to beat more than 162 other candidates to the top prize.Shelby said: “I was amazed when I went on to win the competition; I honestly didn’t think I would win.Shelby is immensely positive about her status as an ‘alternative model’ and has encouraged others to get involved.

This site uses Akismet to reduce spam. Learn how your comment data is processed.