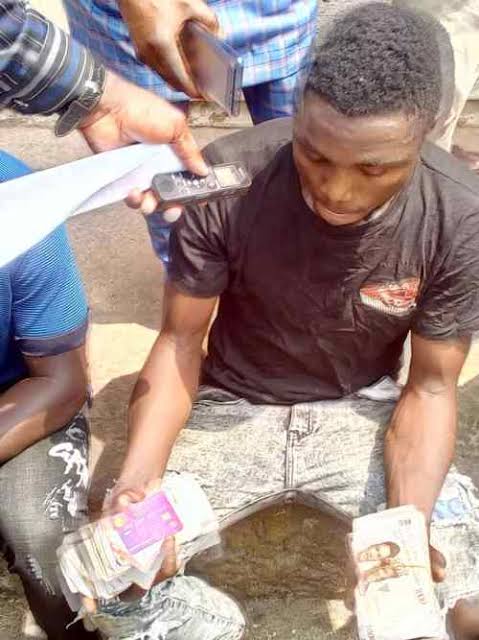 29 year-old Adetunji Adesina has confessed to stealing from banks customers using ATM machines.Adesina who was arrested while in possession of N678,000 made this revelation when he was paraded alongside other suspected criminals by the Edo State Police Command in Benin City, the Edo, State capital.The amount found with him was withdrawn from the account of Ehitomwan Aghama one of his victims. He was also found to be in possession of 10 ATM cards of various banks.According to the suspect, he met Aghama at the ATM machine of one of the new generation banks in Sapele Road, Benin City and acted as though he wanted to withdraw money from the ATM machine, then he dropped his phone on the ground to distract his victim.He said when the victim wanted to help him with the phone, he pressed the cardless button on the ATM machine which now made impossible for Aghama to retrieve his card and that in the process of pretending to assist him, got his pin number which he used to withdraw the money using ATM and POS.“My name is Adetunji Adesina, I am from Oshogbi in Osun State, I met Aghama at the ATM machine of the bank (name withheld) in Sapele Road, I behaved as if to say I wanted to use the ATM machine, then deliberately dropped my phone on the ground, in pity he wanted to help me with the phone.“I punched the cardless button on the ATM machine. He was, unaware that I pressed the cardless button, so he thought his card was stuck in the machine and went to seek for help from bank workers.At that point, I removed it from the cardless transaction and removed his ATM card.“I got his ATM pin number when I was pretending to help him, I later withdrew 678,000.00 from his account, using the ATM, and POS (Point of Sales) before I was arrested by the Police.” he said.Aghama said he does not know the suspect, but that he went to the bank to withdraw money from the ATM and found out that his card was stuck in the machine, he said went to inform his bank, so that they could block it but was surprised that 20,000 was withdrawn from his account, he went back to the bank, but they did not block the ATM.He said a week later, his brother overseas paid about 600,000 into his account and the money was withdrawn by Adesina.The police said the suspect was arrested in the night while they were on patrol and became suspicious when they saw several ATM cards on him. He was taken to the bank in the course of investigation from where the victim was informed.

READ ALSO:   Lady begs for husband’s pardon after he scalded her with hot soup(photos)
Related Topics:
Up Next